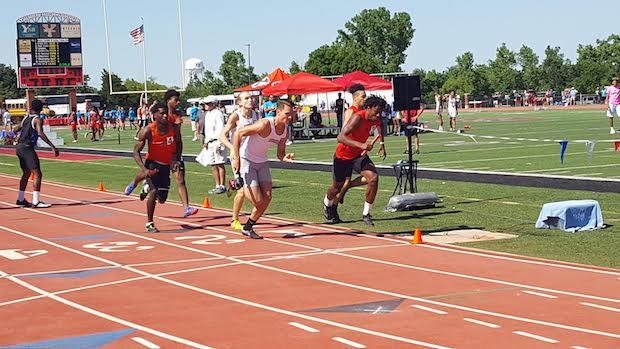 YUKON-- It has almost become old hat for Connor Roddy. Showing up to the state track and field championships and bringing home the gold. It's a process the Duncan junior had done twice before.

So when Roddy faced off with the rest of the 5A discus throwing field Saturday, he was also chasing after some of the throwers to ever come through the state.

Roddy claimed his third consecutive state championship in the discus throw with a toss of 171-feet-11.

"It feels really great," Roddy said. "It's the third year in a row that I've got. It's an honor to come out here and compete with the best people in state. I love it."

Yet, despite all of his success, Roddy said there is one record he still needs to obtain before he closes out his career.

Roddy was one of several athletes over the weekend who either broke a record or added to what was also an impressive resume at the 5A/6A State Track and Field Championships.

That includes Yukon High Jumper Vernon Turner. He came into the meet looking to break the all-time high school record, which sits at 7-7.

After breaking the Oklahoma State meet record of 7-4, Turner asked to have the bar set at 7-7.25. It's a height he has come close to getting over several times in the regular season, but came up short.

The state meet would be no different. Turner clipped the bar on all three attempts.

"It's a blessing for sure," Turner said. "To come out here three years in a row and get back to back to back state championships... I don't even think that has been done in high jump here. That was a record too I guess. It feels good for sure."

Turner will be competing at Oklahoma University next season. But before then, he says he has at least one more attempt to break the national record when he heads out to New Mexico for a meet. He may also attend Tuesday's Meet of Champions to go for the record there as well.

However, Turner's and Roddy's three title do not compare to Charles Paige High runner Cheyenne Walden. With her victories in the 3200 and 1600, the senior ends her career with nine state championships. That includes four straight in the 3200 for the Oklahoma State commit, who has not lost in the two mile run since her freshman season. That is 24 straight races.

While Walden's long distance running career is coming to an end, Lawton MacArthur's Daniel Nickell Jr. is hoping he is just starting a great one. He won the 5A boys mile run with a time of 4:29.16.

"It feels good," Nickell Jr. said. "it was really unexpected. I was praying to God the whole race and it worked out. I was just expecting to medal today. It turned out 10 times better than I thought it would."

Nickell Jr. is only a sophomore and wants to transform this title into much more success down the road for him and his Highlanders.

"Truthfully, I hope it sets me up pretty good," Nickell Jr. said. "I hope I am breaking some records my senior year and winning some more the rest of my high school career."

Some of the most impressive performances of the weekend on the girls side were Moore's Tianna Holmes winning the 6A girls 400 meter dash, Choctaw's Bailey Golden winning the 6A high jump and long jump, Keely Mclaughlin setting meet record in the shot put ad Bixby's Brandee Presley holding off stiff competition to win the 100 and 200 meter dashes.

For the boys the outstanding performances were Westmoore's Anthony Riley setting a state meet record in the long jump at 24.05, all of the Tulsa Union relay teams, Jesse Porter of Putnam City West taking the 6A 100 meter dash, the Moore throws taking first and second in the discus and shot put and OU commit Brock Appiah taking the 200 meter dash.

In class 5A, Del City ran away with the girls championship with 110 points. That was 35 more than second place Ardmore. Carl Albert upset the DC boys to win the 5A boys crown 92-87.

In 6A, as expected, the Edmond Memorial girls dominated with 134 total points. Moore came in second with 66.

On the boys side, the 6A race went down to the wire between Union and Memorial. The Redskins held a six point advantage heading into the 4×400 meter relay. But they made sure the extra points weren't needed as they finished off the meet by winning the relay in a time of 3:18.09. The Bulldogs came in third.

"It means everything," Union coach Janna Patterson said. "This group has been nothing but awesome. They are great kids and worked every single day. Could not have asked for a better state meet. Everything they have worked for this entire season came down to (mile relay) and they proved that they were champions."