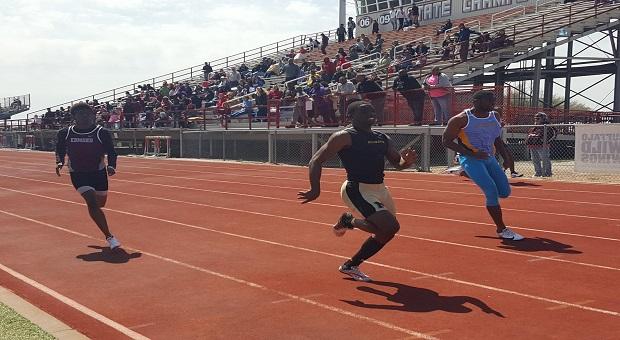 When the Carl Albert Invitational jumped into action in the early morning hours of April 5th, the weather was not being friendly. With frigid temperatures and high winds, it didn't seem like any of the 16 teams on hand would be able to do anything of significance.

But that was not the case. Some of the best athletes from around the Oklahoma City metro put on a show despite fighting the incorporative weather.

The raced lived up to the hype as James edged out Porter to take the 100-meter title. James ran a 10.45, which was enough to hold off Porter at 10.53. Both times would go down as the top times in the state this season in any class.

Porter came back in the 200-meter dash and got his revenge against James' teammate, Howard Douglass. Porter posted a 21.61 to take the event. Douglass was the runner-up at 22.01.

Yet, it was Carl Albert who took the overall boys championship with 102 points. That was 14 more than the Bombers of Midwest City, who had 86.

For the girls, it was Moore High that ran away with the team championship. The Lady Lions lit up the meet with 108 points, Broken Arrow came in a distant second with 82 points.

The Moore girls were led by the exploits of Tianna Holmes. The 6A defending champion in the 400 meters soared to a win at Carl Albert in the same event with a time of 55.55. Not only was that her best time of the season, but also the best in 6A by almost two full seconds.

Holmes also added the 200-meter dash title to her growing list of victories. She ran a 25.16 to just hold off Edmond's Alysheia Joseph, who ran a 25.27.

One of the most hotly contested races of the day came in the boys 4x800 relay. Edmond Memorial and Shawnee were neck and neck from the opening pistol shot.

Come down the stretch of the final lap, it looked like the Bulldogs were going to be able to stay in front. But in the last 20 yards, Shawnee pulled went around the outside of Edmond and leaned over the finish line a split second ahead.

The girls had their share of tight contests as well. Mustang's Rachel Hamel (15.25) won the 100-meter hurdles with Duncan's Savannah Reynolds (15.44) on her heels every step of the way.

In the girls 4x400 relay, the title came down to Moore, Midwest City and Broken Arrow. All three were grouped together coming down the backstretch of the final lap.