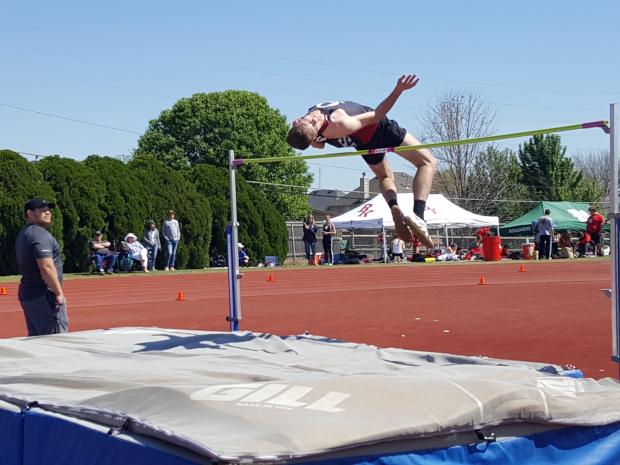 OWASSO, OK. - Noah Payne hadn't competed in almost two months. The Owasso high jumper has had a sprained ankle since the 2017 track season began, but took seven weeks off to let it heal.

Payne chose to make his return back to competition at home Friday in the 35th Annual Owasso Rams Relays. Despite the lay off, Payne took the high jump title with a leap of 6-foot-7

However, the championship didn't easy. Standing in his way was Will Boyd of Edmond North. The two friendly-rivals have gone back and forth for more than two seasons. So it was fitting that they would have to go into a jump-off to decide who would take home the gold hardware in their first meeting of their senior seasons.

Both Payne and Boyd easily cleared 6-6 before moving on to 6-8. Neither could manage that height and went down to 6-7. It looked like both would fall short again until Payne cleared the height on his third and final attempt.

Boyd had one final shot to tie Payne, but his back knocked the high jump bar over and ended the contest.

Despite taking second place, Boyd said the competition this early in the track season will prepare him for the rigors of the postseason.

"Me and him are friends, we like to compete against each other," Boyd said. "Competition likes this helps you get more mentally tough."

Payne made three attempts to clear 6-10, but he was unable to get over the bar at this point in time.

But Payne says he will be there by the end of the season.

"I think this sets me up pretty good," Payne said. "I am starting to get a little more confident. That definitely helped a lot. I need to be clearing 6-10, 7-0 by state."

Payne helped the Owasso boys make a run at the overall team title. However, they came up just short of winning. Tulsa Union claimed the boys championship with 195 points. The Rams were second with 191.

On the girls side, it was Edmond Memorial who ran away with the girls crown. Their 219 points was 69 more than runner-up Union.

Edmond Memorial took the first event of the day when they won the girls 400 meter relay. Their time of 48.36 was a split second ahead Tulsa Union at 48.86.

However, the Union boys snagged the 400-meter boys title with a time of 42.33. The Redskins Keviyon Cooper stormed down the final straightaway to bring the victory home.

"Our relay team did good," Cooper said. "We were focused and just did amazing."

Coming into the meet, Union best time was a 42.5. So setting a new PR in April has the Skins on the right path.

"We just try to go for the W and try to get our time down and set the tone for state," Cooper said.

The Edmond Memorial girls took home another relay by winning the 3,200 meter relay. The Lady Bulldogs ran a 10:09.86 to blowout the competition. Owasso came in second almost 30 seconds behind.

The Claremore boys held off Owasso to take the 3,200 boys relay.

Union's Alexandria Jordan won the girls Long Jump with a leap of 17-11. Hannah Berry of Sapulpa was right behind Jordan at 17-6.

One of the things that makes the Owasso Relays special is that they bring out unique relay events. That includes the Distance Medley Relay (DMR), Sprint Medley Relay (SMR) and the Thrower relay.

The Owasso girls used their home field advantage by not only winning the DMR, but also setting a new track record with 12.56.53. But it was Edmond North who won on the boys side with a time of 10:57.80

Armstead found himself in the runner up position again to a teammate when they moved over to the long jump. Despite jumping 22-03, Armstead was bested by Union's Stephen King. He etched in a leap of 22-04.

In the pole vault, Stillwater's Elissa White (10-6) was unable to knock off Owasso's Heather Ward, who posted a 11-7 foot attempt.

Because the majority of the events were timed finals, participants were able to go against the toughest competition. In the 200 meter dash, the fastest runners were supposedly put into the first of seven heats.

However, Stillwater's Matt Stemm was not one of the, The senior was slotted in the second heat.

But Stemm made the most of his opportunity and ran a 22.61 to blow away his heat. It was also good enough for second place overall behind Daxton Hill of Booker T. Washington, who ran a 22.02.

"I think I performed pretty well today since I ran in races plus this open 200," Stemm said. "I think I did a pretty good job. I wanted to raise the bar for myself every meet. I try to come out here and compete and try and get first every time."